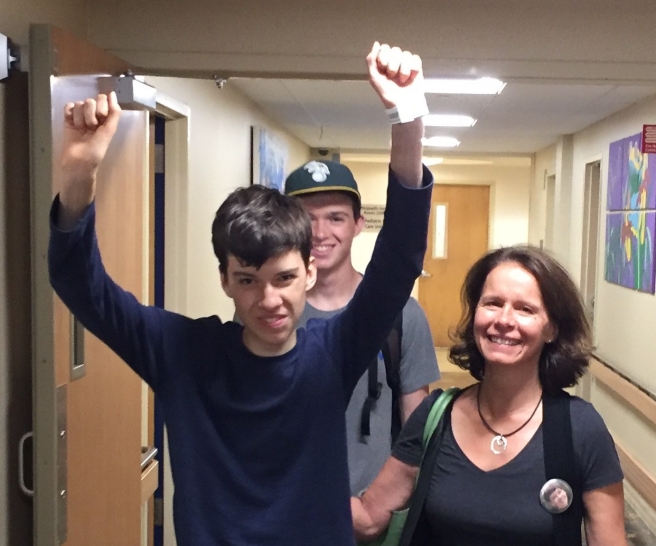 From the moment we awoke yesterday, we were hell-bent on getting out of the hospital. Oscar’s 6am chest x-ray was clear, so we assumed he’d be released by lunch. But Dr. Thé decided to clamp the chest tube and re-check the x-ray six hours later to be positive there was no pneumothorax. Oscar looked so much better on our pre-breakfast walk than he had the day before—he wasn’t dizzy or lightheaded and he didn’t stop to sit, so we expected the x-ray would be fine. To pass the time, I started packing his belongings and cleared out our drawer in the PICU fridge. I got his meds from the pharmacy and inquired about discharge reports and hospital records. Allison from the Dr. ABC team came and removed Oscar’s dressings on his incisions and instructed him on positioning. Sammy the therapy dog popped in for a long visit and Oscar face-timed with his friend Aidan from home.

By the time the x-ray technician appeared at 3pm we were ready to go. Our cooler and several bags were lined up outside his room and we started joking with the the nurses and docs about escaping out the window. But we didn’t need to—the x-ray looked great and Dr. Thé removed the chest tube! We had only the standing scoliosis x-ray, and a couple of more papers to sign.

Another two hours later, while we waited for the wheelchair to finally take Oscar to our car, he started joking with Abe about mini-golf.

“We’re gonna play at least twice, Abe, and one of the those times you’ll have a bad game,” Oscar told him.

“And then I’m gonna beat you,” Oscar said, cracking us up with his sneaky grin.

A wheelchair arrived, but it was for Oscar’s next door neighbor. I turned to the nurse who’d been helping us that afternoon and asked, “So, just how much trouble would you be in if we just walked out, no wheelchair?”

She sized up Oscar, who was standing nearby, shifting weight from foot to foot, clearly ready to go. “If he wants to walk he can walk!”

Oscar was hesitant at first, but then decided he wanted to try. “Just five minutes,” we reassured him. “Shorter than all those walks we’ve been doing all week.”

And so he took off and walked right on out of the PICU, raising his arms in celebration as he went.

It’s only a 45 minutes drive to Paul’s parent’s house and Oscar tolerated it well, chiming in to the conversation from time to time, but mostly staring contentenly out the window. He’d been inside for nine days and I’m sure the lush green trees and grass were soothing.

There’s still a lot of healing to do, but he’s thrilled to be on this side of the surgery, sleeping in a real bed, and surrounded by family. 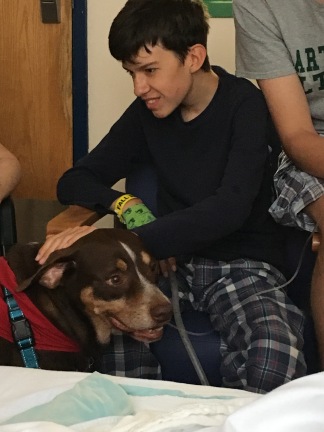 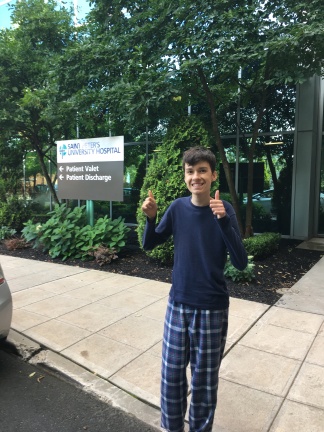 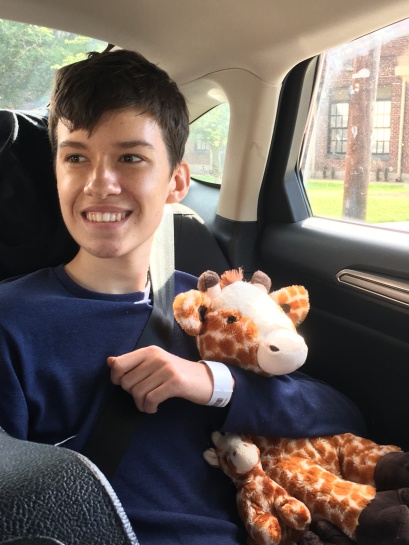 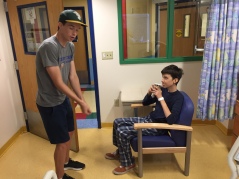 joking with Abe about mini-golf 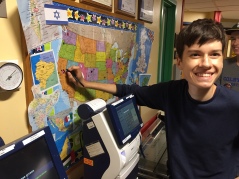 adding his name to the spine surgery map 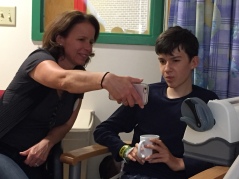