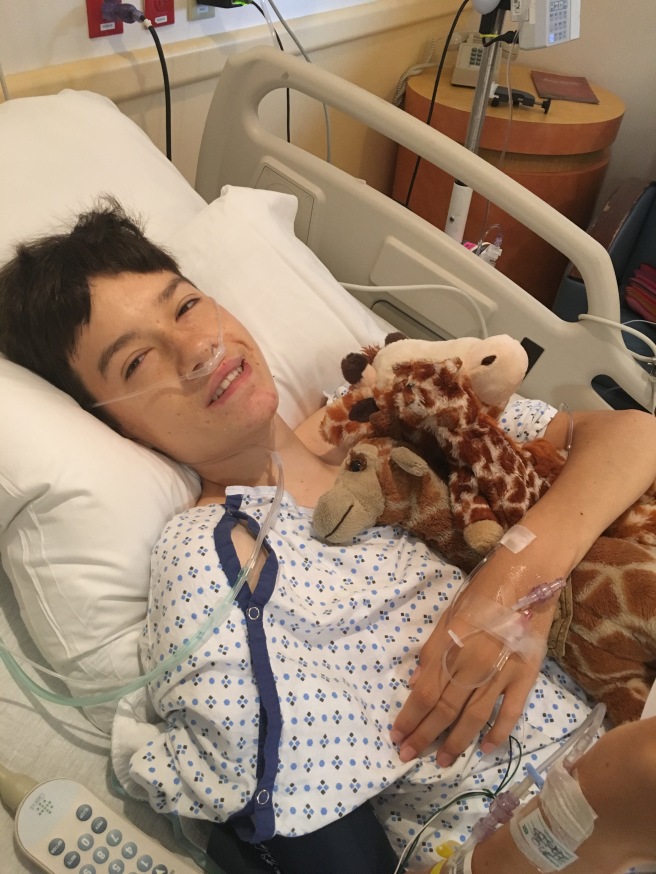 It was a long day of waiting in the hotel lobby. Joel, Drs. ABC’s physician assistant, kept us updated throughout the morning with texts. At 11:30am we learned that the revision of the lumbar curve was finished and that they were closing Oscar up, which would take an hour or more, and then they would flip him and start on the thoracic curve. Relief rushed through each of us reading that Dr. A “felt it came out great!”

With that news we stopped our stress-screening and dove into a game of Catan, figuring we had several hours left. At 12:54pm, Joel let us know that they were starting on the right. But the third text, announcing the end of the thoracic instrumentation, came only a little over an hour later at 2:10pm. We’d just finished our Catan game and had been planning to get lunch. “What?! Already!?” we said to each other, tossing the games into the bag and zipping up our computers. “Why are they done so soon?”

Paul and I rushed down to the surgical floor, tamping down feelings of dread. Did it not go well? Was there a problem? Why so fast? Was Oscar okay?

Of course he was. He was fine. Everything went great. In the end they couldn’t do any rib-trimming and didn’t need any disc-releasing. Oscar’s spine was flexible and easy to work with, and it just went faster than we (non-surgeons) had expected. Oscar now has double screws and two cords on his lumbar curve to hold it in place and guard against breaking, and a whole new set of screws on the thoracic curve. His spine looks amazing (photos to follow), with 15-20 degree curve top and bottom that will straighten as he grows, as planned. The pesky shoulder blade that we’d hoped would flatten with rib trimming is much much better.

I took this all in, and then, after we said good-bye to Dr. A and Joel, Paul and I just stared at each other. We’d both been panicking, and I finally let some of the tears flow there in the elevator bank.

We met back up with Abe and Ruby, who’d been panicking too, and reassured them over lunch. I drew pictures of Oscar’s spine with all the new screws. Between bits of salad and chicken parm we took turns exclaiming, “He’s OKAY!” and hugging each other. The relief just kept washing over us, in waves, and eventually settled in.

We finally saw Oscar and Dr. C around 3:45pm and met our team of nurses and doctors in the PICU. He was doing okay, in pain, and still worried about the constipation. We’re plugging away on pain and GI management. He’s loving his playlist and hasn’t parted with his giraffes. And, when he’s up for it, we show him videos of the spectacular Oakland A’s comebacks over the last couple of days.

Thanks for all the messages and notes—we’ll continue to keep you posted!

One thought on “Relief”