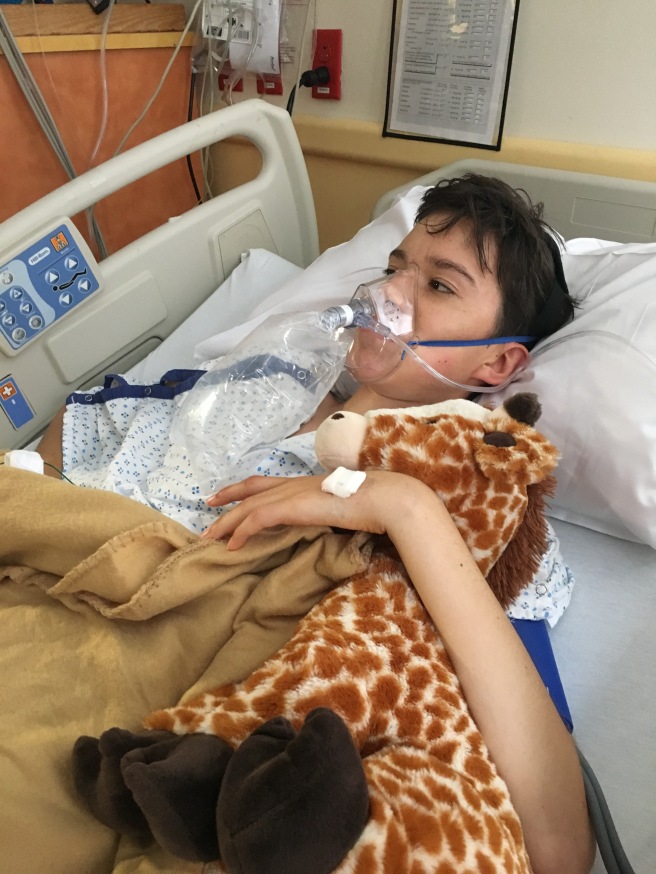 Oscar’s chest tube is still in—he’s stopped draining fluid but the tube is sucking air, lots of air, and we can’t figure out where it’s coming from. From the incision site, or from the lung? Every possible explanation is “extremely unlikely” but clearly something is going on. He’s bubbling away, day and night, like one of those coffee percolators. Our day nurse called our room “the aquarium.”

Yesterday Paul drew upon his vast experience detecting leaks in fermentation tanks and designed an experiment*. He pitched his proposal to the PICU doctor, and Oscar, ever the King of Subtlety, loud-whispered to me, “Mom, Dr. Thé is smiling—he thinks it’s a good idea!” We all laughed. Dr. Thé figured it couldn’t hurt to try, so he called in the hospital’s respiratory therapist for her equipment expertise and we got started. We think the results show that the air has to be coming from the incision site, not an injury to Oscar’s lung, but it’s not at all definitive. Today a thoracic surgeon will examine Oscar. My guess is Oscar is headed for a CT scan to rule out the need for surgery to repair a lung injury. Or, they will take him down to the pre-op room, remove the chest tube and check, with x-ray, whether his lungs fill with air. If so they’ll reinsert the chest tube and we’ll start all over.

Meanwhile, as if that wasn’t exciting enough, Oscar isn’t himself. He’s resisting movement, and gets dizzy, lightheaded, and sweaty whenever he’s sitting or walking. He’s slurring his words and moving very slowly, not at all like his first surgery. Yesterday when we forced him out for a walk he dropped into a chair in the hallway and hung his head, unable to muster the strength to keep it upright. “I can’t do it,” he kept insisting. “I don’t feel right.” It’s scary. On Sunday, or was it Monday, we’d managed four walks, some of them twenty minutes long. After the last walk late yesterday afternoon, a short one, something clicked in my sleep-deprived brain and I started wondering if Oscar has Central Adrenal Insufficiency. I’ve heard from other parents of kids with PWS that it is relatively common, especially in times of illness or stress, like surgery. Oscar’s never shown signs before, but we drew blood this morning to test his cortisol and ACTH anyway. I’m hoping I’m right about this because the solution is simple—cortisol.

So here we are, day 7, and no hint of discharge. Paul’s been taking the night shift all week, and then trying to nap a little at the hotel during the day. I arrive with his breakfast at 7am, and stay till they’re tucked in for the night, sometimes even later. Last night I’d driven Abe and Ruby back to the hotel early—they’d been out all day adventuring with Grandpa and Audrey while we tried to tackle some of the medical issues. When I finally got back after 10pm they were starving and punchy. I bought them microwavable burritos in the hotel lobby and chatted with the front desk manager who, knowing our situation, went and grabbed us some bananas and oranges from the back. Then the three of us snuggled into Abe’s twin trundle bed and watched an inning of the A’s game together, a moment of respite in amidst the uncertainty.

*The Great Experiment: Paul hooked up an oxygen meter to Oscar’s chest tube and measured the oxygen content of the output. Next we put Oscar on 100% oxygen, a plastic mask over his mouth and nose for two hours, and continued to measure the output coming through the chest tube. The output stayed at the same oxygen concentration, about 21%, same as room air, but when we had Oscar blow directly into the meter it spiked to 54%. In theory this means that the air coming through the chest tube is not coming from the lung into the thoracic cavity, otherwise the oxygen levels of the chest tube when Oscar is on supplemental oxygen would be higher. The second control, pumping the 100% oxygen in through the incision site, wasn’t conclusive. (This is what a sleep-deprived concerned parent-scientist does…and I love it!)

3 thoughts on “the great experiment”