We’re T-36 hours to surgery and Oscar’s anxiety is mounting. “How long will the surgery take,” he asked three times today. “I don’t want it to take too long.” And I heard I’m not looking forward to Wednesday about seven times.

I’ve been playing up how great the hospital is and how I’ve heard that there are lots of fun distractions, like DVD players in every room, board games, and therapy dogs that visit weekly. I didn’t tell him about the ice cream cart that treats every patient and their family, daily. Paul and I have already decided that in addition to talking to the entire nursing staff about PWS we’ll also need to post a sign on the door. No Food Here, Please :-).

To address Oscar’s biggest fear—post-surgical GI issues—we’ve armed ourselves with an array of GI motility meds and the Prader-Willi specific GI protocol from Dr. van Bosse, the pediatric orthopedic surgeon that specializes in PWS at Shriners in Philadelphia. To address his concern that he’s going to be bored I’ve stocked his backpack with books, a silly basketball game, some intricate coloring books, his Oakland A’s magazines, and his iPod, which unbeknownst to him I’ve loaded with a new playlist called “Oscar Crushes Surgery.” (The playlist will keep growing, so if you have a song idea send it along.)

So now we’re just into distracting Oscar. Today was cloudy and wet and he was grumping that he didn’t want to stay in the house all day. “I want to DO something!” he kept saying. But when the rain slowed he didn’t want to swim, or go for a walk, or play a game—all of my ideas were terrible, of course. Finally, he agreed to walk down to the beach with me, knowing that getting outside would be great for both of us. He watched the geese take flight and perch on a rock a little ways out. And then he sifted through the sand for cream and orange-colored rocks. The water and sand were soothing, and the questions slowed. But things really turned around when Paul and Grandpa showed up a little while later with basketballs. Oscar became animated again and challenged himself to see how many three point shots he could make. (An impressive TEN to Paul’s three, in case you’re wondering.)

The questions returned as we were shuttling him off to bed tonight. “What am I going to do when I wake from surgery? I don’t want to just lie there.”

I rattled off my speech about the DVD player, the board games, and the therapy dog. I added in a reminder about watching the A’s games on my computer, even if it’s past bedtime.

He gave a little hop and said, “Well, then, I’ll be drastically distracted, won’t I?!” 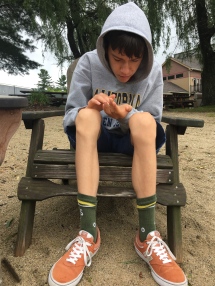 sifting through the sand 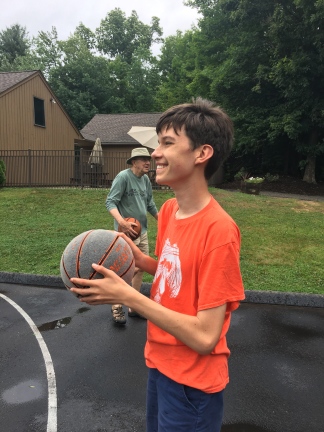 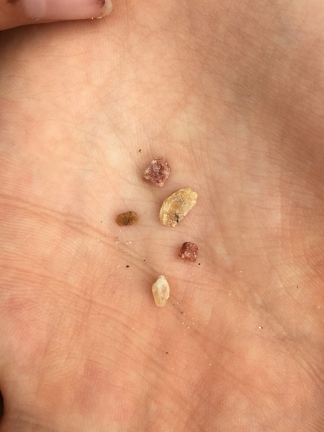